Through the assistance contracts, access to our additional tools is granted. Below is non exhaustive list of examples of tools available.

EDGE has been designed with the idea to facilitate the edition or creation of GDML files as there is no currently simple and accessible software. This software can create or load GDML files and save them with a real-time 3D visualization. It allows the creation of complex GDML files by handling several-layer hierarchy and with all the shapes handled (Box, Cone, Ellipsoid, Paraboloid, Quadrangular, Sphere, Triangular, Tube, etc). EDGE is also able to import B-Rep (GEO, STEP-AP203-214, MSH) ,and STL/UNV formats.

For each shape, a simple panel permits to edit its geometrical and material properties as well as its position and orientation. To facilitate the work of the user, it is possible to translate and rotate several elements at the same time.

In the context of interoperability between software, EDGE can also export the geometry to .geo files, the B-Rep file format defined by Gmsh.

You can find more informations on EDGE on SpaceSuite website. 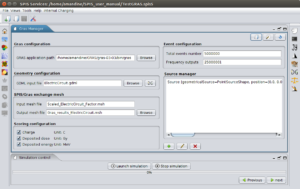 Radiation Manager has been created with the idea to facilitate the setting and controlling of radiations analysis simulation. It allows the user to realise radiations analysis based on 3D Monte-Carlo models based on Geant4, such as the ESA model GRAS. This model is not provided with the Radiation Manager but it is possible to download it on the ESA webpage by subscribing to the community. This download is left to the user responsibility. Radiation manager also allows a Geant4 user to directly upload a dedicated script file (.mac file) and run the simulation.

The radiations analysis results (deposited dose, charge and energy) of Radiation Manager can be used as inputs for an internal charging analysis run with SPIS-IC. The software also proposes solutions for the 3D post-processing of radiations results.